This is the day I’ve been waiting for for five weeks now. 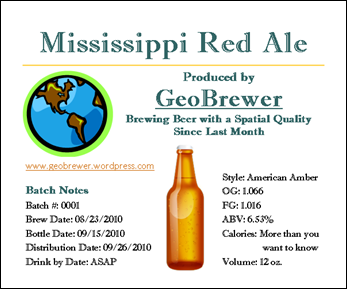 Actually, I cracked the first bottle four days ago, so the title of this post should be Drinking Week. I’ve had about six bottles so far, and I’ve deemed the results to be a success. My wife even likes it, which means something because she’s not a big fan of darker beers. I can show you pictures of the beer,  but unless you stop by my house for a drink you won’t be able to actually taste this stuff. So, as a substitute here’s my description of the results. (I’m using the BJCP format here, but I in no way have any actual experience or training as a beer judge. This is really just for fun)

Appearance: Looks like beer. Nice clear red/amber color. I was surprised at the clarity, as it was still very cloudy when it went into the bottles. Foamy beige head that sticks around for a little while.

Flavor: Tastes like beer. Starts out with a malty taste, then a spicy, slightly evergreen hop taste (the Chinook hops). Malts are there but I was expecting more. Although the alcohol computes out to 6.53% ABV, it does not taste like an overly powerful beer. That was one of my fears as I was brewing it. I would say it’s a balanced beer. It’s not as heavy tasting as it looks, which is why my wife likes it. Maybe a little sour\tartness if you look for it.

Mouthfeel: Nice full mouth feel. No watery taste at all. Low carbonation, but definitely not flat. No fizzy soda pop carbonation here. Some astringency. Dry finish. I think if I had started with a lower OG, (as the recipe called for) it might have a little more malt oomph, and be a little less dry. I’m thinking the high alcohol content contributes to the dryness.

Overall Impression: I like it. I personally rate beers by how many glasses of it I’d like to drink. A typical mega-brewery beer – I usually drink one and don’t really care if I have another. A good craft beer – I know I’ll want another one even before I’ve finished the first. This one, I knew I’d want two after the first two sips. I also wouldn’t hesitate to share a bottle or two with anybody that stops by the house. There are definitely a few things I’d tweak, but I am pleasantly surprised at how this first batch turned out. 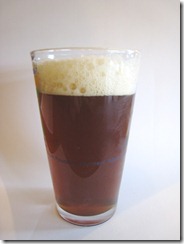 A few things to watch out for the next batch

Five gallons in the fermenter does not mean a five gallon batch – Should go for a larger boil results in 6 to 7 gallons of wort, and an original gravity that’s closer to what the recipe calls for. It also allows for some loss from racking (and taste testing along the way, too :-).

Keep a close eye on the yeast – A slight mishap resulted in loss of some yeast. Although the primary fermentation looked vigorous, it might have affected the taste of the beer.

Keep the temperature down – My cellar is a constant 72 degrees almost year-round, and unfortunately there’s not much I can do about that. This allowed the fermenter to get up into the low 80’s at one point, which might have affected the beer. The only real solution I have for this is using some kind of refrigeration, which is out of the question for now.

The right equipment makes a difference – I now have a couple extra fermentation buckets, a real hydrometer flask, and an auto siphon. These aren’t absolutely necessary, but will make things a lot easier.